Milk and other dairy products can be eaten daily without increased risk of cardiovascular disease and may even have a cardio-­protective effect.

Many South Africans follow diets high in fat and SFAs and tend to exclude milk from their diet in pursuit of lower fat choices. Dairy consumption is further compromised by the perception that regular consumption of these products is unhealthy, particularly owing to its saturated fat content. In contrast, some recent studies report beneficial effects of milk and dairy products with regard to cardiovascular health.

The main SFAs implicated in cardiovascular disease, namely stearic, palmitic, myristic and lauric acid, differ in their effects on serum lipid profiles. Stearic acid, for example, has a neutral effect on total, low­-density lipo-protein (LDL­C) and high-­density lipo-protein (HDL­C) cholesterol, while lauric acid and myristic acid can cause a greater total cholesterol increase than palmitic acid would. Lauric acid has a beneficial effect on plasma lipids by decreasing the total­ ­HDL cholesterol ratio because of an increase in HDL­C.1 (Also see table above.)

The total SFA content of fresh full-­cream milk is 1.93 g and of low-­fat milk (2%) 1.30 g per 100 ml. Dairy products contribute relatively little to the SFA composition of the diet compared to other products of animal origin. 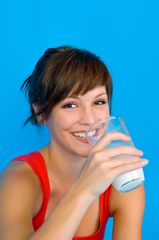 Milk or other dairy product consumption and cardiovascular health

Milk and other dairy have been linked to cardiovascular disease risk by increasing SFA intake and serum cholesterol levels. This association is now being increasingly questioned:

· Dairy consumption may reduce the risk of ischaemic heart disease and stroke. Two meta-­analyses of prospective studies on the consumption of milk and dairy foods and the incidence of vascular disease indicated an estimated 8% and 16% reduction in ischaemic heart disease and a 21% reduction in stroke events in subjects reported to consume the most milk, relative to those drinking the least milk within each cohort.

From the old hypothesis to a new view

Earlier reports of positive associations between SFA intake and the incidence of coronary heart disease led to the so ­called ‘cholesterol hypothesis’, which implies that all food containing SFAs of any kind increases the risk for cardiovascular disease. However, a recent meta-­analysis of well ­designed prospective epidemiological studies found no significant evidence for an association between dietary SFAs and increased risk of coronary heart disease, stroke or cardiovascular disease.

Recent literature show no conclusive evidence for milk and other dairy as a food group being associated with increased risk for coronary heart disease. Dairy products in general, as well as their specific components, have furthermore been shown to have a positive effect on non-­lipid cardiovascular disease risk factors such as blood pressure, inflammation, insulin resistance and type 2 diabetes, obesity and metabolic syndrome. These findings suggest cardiovascular benefits of dairy foods that go beyond blood lipids. Milk and other dairy products can therefore be eaten every day as recommended by the South African Food Based Dietary Guidelines, without increased risk of cardiovascular disease and possibly even fulfilling a cardio­-protective role.

We use cookies on our website to give you the most relevant experience by remembering your preferences and repeat visits. By clicking “Accept All”, you consent to the use of ALL the cookies. However, you may choose "Reject All" should you wish otherwise.
Accept All    Reject All
Manage consent

This website uses cookies to improve your experience while you navigate through the website. Out of these, the cookies that are categorized as necessary are stored on your browser as they are essential for the working of basic functionalities of the website. We also use third-party cookies that help us analyze and understand how you use this website. These cookies will be stored in your browser only with your consent. You also have the option to opt-out of these cookies. But opting out of some of these cookies may affect your browsing experience.
Necessary Always Enabled
Necessary cookies are absolutely essential for the website to function properly. These cookies ensure basic functionalities and security features of the website, anonymously.
Functional
Functional cookies help to perform certain functionalities like sharing the content of the website on social media platforms, collect feedbacks, and other third-party features.
Performance
Performance cookies are used to understand and analyze the key performance indexes of the website which helps in delivering a better user experience for the visitors.
Analytics
Analytical cookies are used to understand how visitors interact with the website. These cookies help provide information on metrics the number of visitors, bounce rate, traffic source, etc.
Advertisement
Advertisement cookies are used to provide visitors with relevant ads and marketing campaigns. These cookies track visitors across websites and collect information to provide customized ads.
Others
Other uncategorized cookies are those that are being analyzed and have not been classified into a category as yet.
SAVE & ACCEPT